skip to main | skip to sidebar

following my own advice...

Tomorrow, tho the moon is in Cancer, I'm making several calls about readings. Cancer moons are all about domestickyconservativeinaction but with natal Mars in Cancer, I can occasionally zoom out of the crab shell onto the beach berm. So to speak. . .
More from The Astrological Elements:...
On Sagittarius:

Of the three fire signs, Sagittarius definitely is the most varied, the most flexible and the least likely to need a lot of reassurance. If you're friends with a Sagittarius, chances are you met doing some activity or game or diversion. A chronically restless sign, Sagittarius is invariably the more eccentric member of any group. They like it if you share their passions, but it's not necessary for them.

You can learn a lot from a Sagittarius as they often are skilled jacks and jills of all trades. Having a Sadge friend can provide a lens on the wider world and give you unusual insights. It's not a particularly sentimental sign, and not particularly noted for partnerships. Emotionally self-sufficient, Sagittarius is a maverick, happy to share their hobbies and preoccupations when asked, but unlikely to yack your ear off unless prompted.

Posted by Sally Cragin at 8:35 PM No comments:

Well the ACTUAL book arrived. Pretty amazing and strange to actually hold it. Unfortunately the wrong author pic was used but the books came with a cover note that Zoe's pic (which is my FB profile page) would be used in the SECOND printing, which is encouraging.
Have been skiing 3x in past week. I can see that publicizing this book will actually coincide with the end and postlude of ski season which is actually pretty convenient. I have a book. How completely freaky!
Posted by Sally Cragin at 8:42 AM No comments:

I heard from my Librapublicist Jennifer at Llewellyn who seems to be in that null space in American life known as Between Flights. I think it's one of those flash-forward settings on LOST, also.
To answer some questions folks had: where to buy the book. EVENTUALLY barnes and nobles and borders. By ALL means request it NOW! and I'm calling the local B&N to confirm a reading...
Fellow Libra News. I should have remembered Bode Miller was a Libra -- albeit in the Simon Cowell/Eminem flavor of Libra. Which is to say that in chaos, we find harmony, versus finding it in, you know, actual harmony. (Exception for Simon, who obviously does like harmony, but is an uncharacteristically outspoken Libra. Like Oscar Wilde, although I keep hoping he'll be a tiny bit wittier than he is. But I digress. Which is a Libra thing). Bode, like many other Libras is in the early stages of another @#$%^^& Saturn aspect; this one the Saturn conjunct solar aspect. Think back to 81-83, if you want a preview. I just really, really, really hope he pulls it out for the Olympics. He transcends it all...
Posted by Sally Cragin at 8:48 PM No comments:

it's snowing on my blowing own horn....

Ok, article off AND THEN BACK, YEESH!! okay, off again. We just changed from c*mc*st to Veri$on and got a bunch of Your Mail was returned from folks and some the other way...
I don'tunderstandthe intranet, I really don't. 20plus years ago I'd hammer out my review of the rock band, walk the 1.5 miles to the Phoenix office, type it in on their system (because we'd already eliminated typesetters by then). Hang around while the editor smoked 10,000 cigarettes and had another 20,000 cups of coffee and jawed on the phone. Eventually tell said editor I HAVE TO GO NOW YOU WANT TO CALL ME WITH THE CHANGES? which would usually prompt some action, altho this editor was a CLASSIC Capricorn, e.g., notgonnamoverealfast not matter what. It seemed like a gigantic improvement to hammer out my review of the rock band on the 2-disc Epson PC I had, schlep said disk to the phoenix, input it into the editor's PC, follow next steps, rinse, repeat.
Somewhere along the line everything I do HERE shows up THERE. unless it doesn't. Aargh!! Well, I have written a humdinga of an article about TAE and the general ideas behind TAE which will be in their next newsletter which is actually a v. nice 4-color salestool. I need to request a GIGANTIC PILE of these as the peregrinations to SPREAD JOY about my book (buymybookbuymybook) begins.
Excpet there's 6plus inches of snow that came down today. phooey.
Posted by Sally Cragin at 5:30 PM No comments:

an article for Llewellyn about my book...

...that's not an excerpt of the book. That's this weekend's task. Monday I'll be on WCRN-830 AM to talk about the week ahead and may mention this book and webpage....
Posted by Sally Cragin at 7:55 PM No comments:

There's a bakery next door to Gibson's in Concord NH. I love visiting Concord, and made my first foray up there during a presidential primary last time around. Gibson's has a wide range of quality reading material and I hope we can get some advance press happening so people are lined up.
New moon on Friday, so I may make more calls then, but from now until then, it's that accident-prone dark of the moon time which I've found finds me slightly uncoordinated when it comes to any outreach. I have a piece about the book due Monday for Llewellyn's in-house magazine which goes ALL over so v. happy about that.
80 years ago, if Virginia Woolf sold 5000 copies of something it was a runaway best-seller. And she wasn't "Virginia Woolf" back then. Not to compare myself with the foremost genius/stylist/avatar of text (how many writers ALSO were successful publishers?) but the scale of publishing is so different and so splintered. My book can be catalogued (and will be marketed) as new age self-help, and of course the "astrological" in the title puts it on another shelf. I'm hoping the "astrological" adjective is a selling point. When I found my interest in this topic piqued I couldn't read enough books about it. Now I've created my own and hopefully the general reading audience as well as the specialists will discover it and make it their own. My favorite books are literally falling apart and held together by rubber bands.
Posted by Sally Cragin at 12:42 PM No comments:

How do you do marketing and PR on a Sunday? I got so fired up after the Friday phone meeting I'm pedalling in place. Ok, I TOLD people in person about TAE :-) The Cronins have promised to come to the reading at B&N when it comes. Dan and I have the same birthday and were seated in adjoining seats throughout my three years at Lunenburg High School. He's calmed down A LOT and became a lawyer so his argumentative impulses are safely channelled. Heh. Since Saturn is in Libra from now through 2012, I keep track of him and his wife Jacquie (who's later on in the sign) to let them know what mischief the universe has in store.
I also told my two clients yesterday -- one asked the perfect lead-in questions. "I want to learn how to get along with Tauruses!" she said and I was able to say I have JUST the book for you!
Posted by Sally Cragin at 11:29 AM No comments:

I am off to Roots to see some nice ladies for my personal consultations. I should probably download info on my book so I am carrying it EVERYWHERE. At some point, I'll have a carton in the car.
Some updates: Called the local B&N who are eager to have me read and had the sensitivity to comment, "you'll probably want to pick out the date based on the astrological aspects," which made me smile. Generally putting-it-out-there efforts are best undertaken with a waxing moon phase, although I've had remarkable results with new moon stuff. Also emailed my friend Becky's husband who has a great bookstore in Concord, NH, Gibson's. Llewellyn will support efforts I make to get readings at bookstores and other venues by sending media material and setting up the shipping of books with their sales department.
When I told them I did have a lengthy and varied history with daily and weekly journalism outlets in the Boston area they suggested I reach out although they generally caution authors against contacting book reviewers directly. I commented that during my years at a rock critic it was very wearying to hear from bands about how great their band was. As Doug Simmons, my predecessor in Cellars by Starlight said, "if you're so great, someone else will tell me."
I mention this because the marketers at L. said they'd had authors "go rogue," and contact reviewers DIRECTLY. Knowing the infrequency of book review sections in the press and the glut of material that comes over, through and around the transom I have to agree.
That said, I was actually entertained by The Astrological Elements reading it post-partum, as it were. Here's an excerpt:

Earth signs are very  likable. Not always lovable, because they're the element that often feels they have to “hold the line,” but certainly easy to get along with. They come in three flavors: Taurus, Virgo and Capricorn. And, yes, there's as much disparity among them as there are similarities. They combine well with one another and can even have lasting love relationships, but often someone with another element will bring out their hidden qualities.

Earth signs are renowned for their will and endurance. Yes, some would say stubbornness, and every earth sign I've ever known will admit (after the fact) that they are stubborn. You do not want to wrangle with them without a cohesive strategy laid out ahead of time. And for all their fondness for routine, they can be surprisingly capricious when it comes to “acting on whim.”

It's also a sign you don't want to rush. Let them move at their own pace, and figure things out on their own. Once they learn something, they know it well, but you can add to their feelings of insecurity by acting as if they need to be speed-demons when it comes to task completion.

Later...(I love 3star breaks). Just heard from Laura Cortner at http://www.21stcenturyradio.com/. She produces a very interesting show with a very interesting and surprising philosopher named Dr. Bob who's kind of the Zelig of pop-culture -- intersecting w/a variety of realms. He wrote an excellent and detailed book about the making of my favorite cartoon movie when Hal and I were kids: Yellow Submarine. I've been a guest on the show talking about astrology and taking calls from folks. They're based in Maryland and we wave on our way to Bethany Beach. So hopefully I'll be on soon especially once TAE is in the stores....

Posted by Sally Cragin at 8:13 AM No comments:

The Astrological Elements - -My Book! 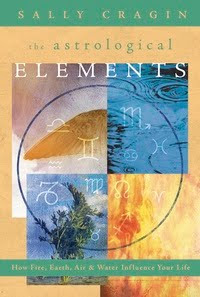 After an exciting conversation with Jennifer and Steve at Llewellyn, the author says THE HELL WITH THE WANING MOON, I'll start a blog about my book, The Astrological Elements TODAY!!
Here it  is!
http://www.llewellyn.com/product.php?ean=9780738718712
go visit!! say 'hi' or say 'buy!'
Posted by Sally Cragin at 8:40 PM 2 comments:

The Astrological Elements On The Road...

Every Monday, 11 am, WCRN 830 AM (until Hank and I get sick of this), will do tasteful yet appealling on-air hype when I'm providing weekly forecasts to listeners...
Jan. 9, 2011, Burlington Public Library, 7 pm Astrology Workshop! I've been doing a few of these around Boston and they are very fun. The economic downturn has affected a lot of people who are between gigs...No need to register, and here's info on BPL:
http://www.burlingtonpubliclibrary.org/
January 24 and 31, Peabody Library, 7 pm. A two-part natal horoscope workshop. Bring your chart, learn lots more.